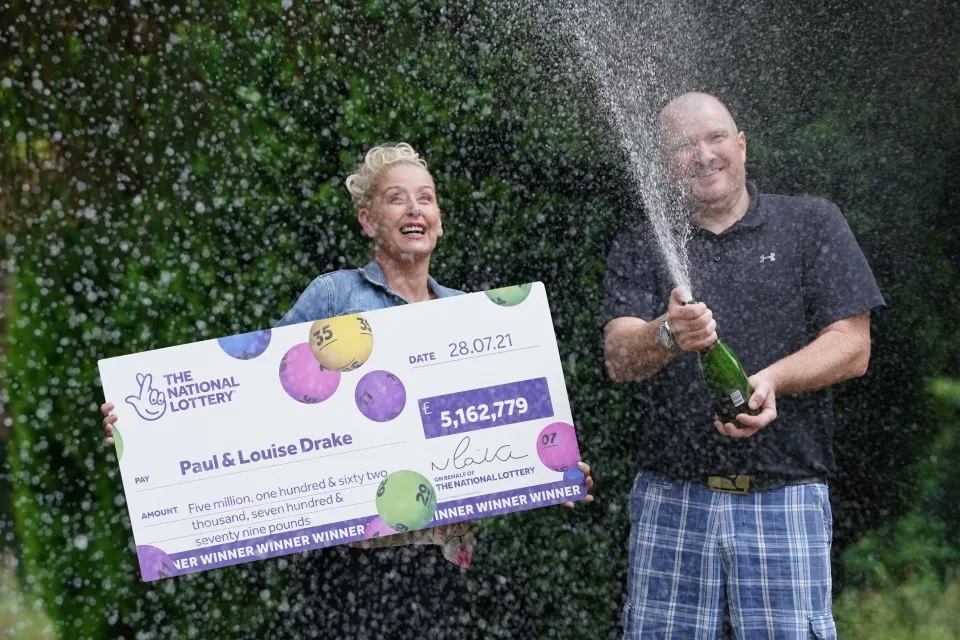 A grateful Scottish couple who worked as key workers were thrilled to scoop £5M on the National Lottery! Paul and Louise Drake, 47, from West Lothian, who were working throughout the pandemic and have now landed a life-changing jackpot. The Family of 4 including 2 sons, 15 and 11, with Paul recently leaving his job as a Production Operator at the supermarket chain Lidl and Louise who is a district nurse.

For the golf and car fanatic the discovery of his life-changing winnings certainly gave him the early morning kick he needed as he prepared to head out for work, He said: “I car share with two colleagues, and it was my turn to do the driving so i had to be up and ready

“It was about 4:30am; I then got this overwhelming urge to check my Lotto numbers which i had done as a Lucky Dip. I checked my ticket and just sat there in complete disbelief. “I’m not an emotional sort of person but I just stop myself bursting into tears. I ran back into the house shouting my wife’s name and woke Louise up to tell her. We just couldn’t believe it.

“As I was the designated driver that day I still had to go and pick up the guys for work. It was so hard to keep it to myself. I went into the office and just said I wouldn’t be able to come in that day”.

“The people who I drove to work that day knew something was up and that I was acting strangely so it wasn’t long before people figured out my secret news. Our friends, family and colleagues are over the moon for us, they’re really chuffed, which is great.” Louise went into panic mode when Paul rushed into the house at the crack of dawn, immediately thinking something was wrong and immediately thought the worst.

She said: “I got such a fright thinking something was wrong, he was shouting something about the lottery, and i thought i heard £5,000 and tried to go back to sleep. But obviously that didn’t happen!” The car fanatic Paul has already set his sights on a Porsche, and maybe a state-of-the-art Range Rover as well. Louise loves to travel and wants to take their sons to New York City, while planning a family trip to Florida.

Paul added: “We’ve both worked hard all our lives, as did our parents before us. This money is absolutely life changing, and it will help our lives dramatically from a financial perspective, but we won’t let it change who we are.

“I’ll still chase a bargain and I definitely still won’t be paying £6.50 for a bacon cob at the golf club.”

“Normally I am quite organised with my playing my numbers but this time, I must’ve been in a rush, probably getting 1 of the boys to an activity! “I ended up just asking for three Lucky Dips.

It comes hours after it was revealed two NHS front line workers Linda & Stewart Priston from Kent scooped £300k on the Lottery, which is fantastic news!

A Whole Lot of Jackpots can be wonfrom around the world online with us at WeLoveLotto!