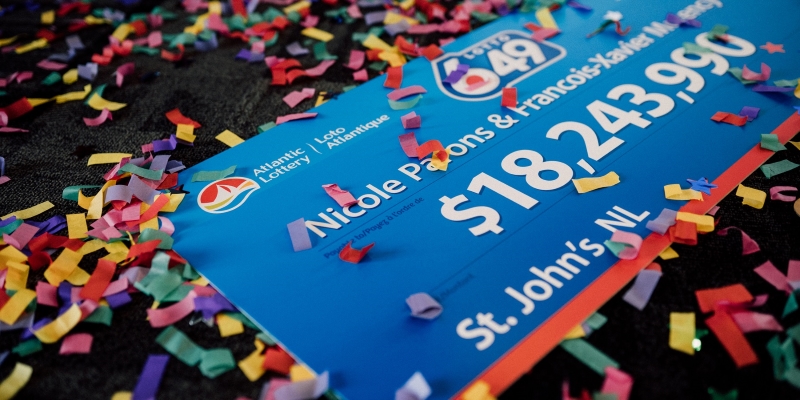 The province’s most recent multi-millionaires were revealed at the Alt Hotel in downtown St. John’s yesterday afternoon. Rumours had been flying since Atlantic Lotto confirmed the lone winning ticket for the September 12 649 draw had been bought in St. John’s…

6/49 Players were kept on their toes while rumors about who had won the amazing $18.2 million jackpot started to spread and simmer.

Finally, at the Alt Hotel in downtown St. John’s, the Atlantic Lottery revealed the winners — Nicole Parsons, a human resources manager, and Francois-Xavier Morency, a manager at a shipping company. It was Nicole who bought the ticket with random numbers at the Circle K Irving on Frecker Drive in the city’s west end

The lucky winners had heard the news that the lone winning lottery ticket was sold in St. John’s but Parsons says she put off checking her tickets because she wanted to put off the disappointment of not winning. But after 3 days of waiting, she went back to the same Circle K only to find she was the major prize winner!! “I was hanging onto that dream that it could actually be us. I certainly didn’t actually expect that it would be us to win this amazing amount of money.”

The couple, who have no children of their own, plan to look after family—nieces and nephews and parents are to be looked after first. They also plan to buy a new condo in Quebec to make it easier to visit Morency’s family there.

Since finding out that her lottery ticket was the one to win it all, Parsons and Morency have had some time to mull over what she and her partner plan on doing with the newfound winnings. They’re also avid outdoorsy-types, so they foresee a lot more camping, hiking, and fishing in their future with plans for early retirement.

Aside from all that, their plans involve other selfless pursuits. Parsons, who is involved with a local non-profit organization, can’t think of a better way to give back to people in need.

Play global games at WeLoveLotto today! You could be the next big winner. Would you put off checking your ticket?