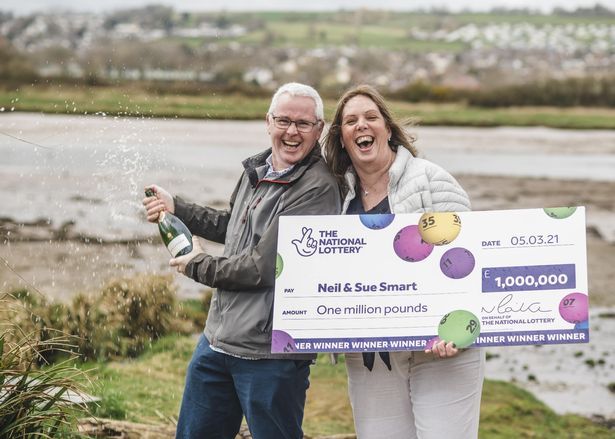 A family have landed a £1 million EuroMillions win -This amazing jackpot win can now allow planning to help transform and enhance their family life of their young disabled son who was born with scoliosis.

The Devonshire family, say the jackpot means they can buy a bigger house and car to help care for their youngest aged nine child, who also suffers from associated conditions, and needs hospital support and regular trips to Birmingham.

The win will also mean a bigger car for the couple, which will make their regular 300-mile round trips to Birmingham a lot more comfortable. Neil, 50, and Sue, 51, have three kids – and thought the win, after the draw on Friday March 5, 2021, was a joke at first, we just never thought we could win this kind of money to help us as a family.

Neil, who is a builder’s merchant, I don’t check after every draw only when i remember and only got around to it later on that week. Sue had gone to work, and the children were upstairs, so I thought I’d check to see if I needed to put on a line for the next week. When I logged into my online account, I immediately saw a message which said, ‘Congratulations you’ve won £1M’. “I thought no way and called my daughter to re-read it. We both thought it couldn’t be real, even though it was clearly on the official app. She posted on our family group chat that Dad had won the lottery and Sue came back saying it was probably just a fiver”.

Not discouraged patiently Neil was up early to open the local builder’s merchant where he works. “I wasn’t going to stay in bed and leave them in the lurch, what if I was wrong about the win?” Neil called the official claims line to be told you are correct you are a millionaire and, after letting Sue know the good news, he went back to work to complete his shift.

The couple admitted to being excited but remained very calm until everything was finalised and in their account. Once the money was cleared in the bank the following week, the pair popped the Champagne and celebrated their amazing luck. Neil said: “We’ve never struggled for money, we have always been careful, but this will make such a difference to us as a family. “While they will stay local, the new home means more space to support and help him as he grows up, entertain their grandchild and support their own parents as they get older.

Neil said: “People have said, ‘well done, it couldn’t happen to a nicer family’, that it is nice to see ordinary people win, which is all lovely to hear.

“But the win, and especially the new home, will make a difference to our whole family for years to come, and that is so important.”

Who could you help playing global games at WeLoveLotto today!